Hudson is a town in Middlesex County with a total population of 19,063 as of the 2010 census. Hudson is located just off route 495 and is bordered by Bolton and Stow on the north, Marlborough on the south, Sudbury on the east, and Berlin on the west.

Before its incorporation as a town in 1866, Hudson was a neighborhood and unincorporated village of Marlborough, Massachusetts, and was known as Feltonville. From around 1850 until the last shoe factory burned down in 1968,[1] Hudson was known as a "shoe town." At one point, the town had 17 shoe factories, many of them powered by the Assabet River, which runs through town. Two houses, including the Goodale Homestead on Chestnut Street (Hudson's oldest building, dating from 1702) and the Curley home on Brigham Street (formerly known as the Rice Farm), have been cited as way-stations on the Underground Railroad.[2]Both properties remain in existence as of 2018.

Hudson has changed dramatically over the last decade with the new addition of the Assabet River Rail Trail, and revitalizing Main St downtown with new businesses including Medusa Brewery (excellent beer but bring your own food)  the New City Micro Creamery ice cream shop features ice cream made with liquid nitrogen which somehow makes it even more creamy and delicious, new and restaurants, including the popular Rail Trail Flatbread, boutiques and even a hidden "speakeasy". 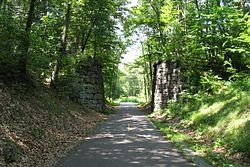 Find a Home in Hudson